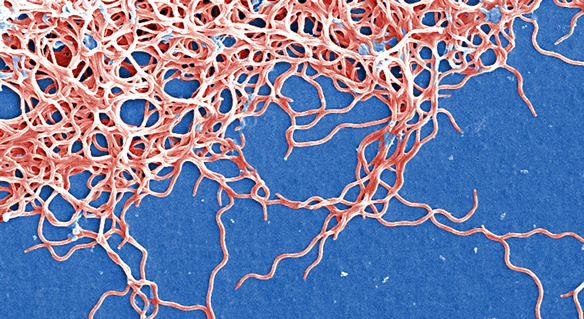 I've been researching Lyme disease full time for about 7 years now. This does not mean I know everything -- not even close. The more I learn each day, the more I realize I don't know. But, what it does mean is that it is a very rare occurrence that I talk to someone who has information that surprises me, or information that I am impressed with.

​This happened to me today. It all started with a book review of The Top 10 Lyme Disease Treatments (a book I wrote in 2007) that appeared in the October, 2008 issue of Townsend Letter for Doctors and Patients. Usually when my books get press, people call me to chat about this or that; most of the time, a waste of time.

This time, a doctor in Ohio called me and said I absolutely had to talk to a doctor he knew - a doctor named Scott, who practices in the Southwest. I won't tell you Scott's last name, and I'll explain why in a little while.

The Ohio doctor said Scott was a genius and had successfully treated over 3,000 Lyme patients with a special intravenous therapy.

Now, let me back up for a moment. I hear these types of claims all the time, for various "miracle treatments," and most of the time, they either turn out to be scams, or more often, well-intentioned protocols created by people who just don't understand Lyme disease. Nevertheless, because I feel it is my responsibility to stay up to date with current research, I usually look into any research lead that I get.

So I called Scott, fully expecting to waste a half-hour on the phone. As it turned out, it was not a waste of time, but a fascinating discussion. As I discussed Lyme disease with Scott, I realized that not only did he have a strong understanding of Lyme disease, but he had knowledge and insight which I have long known to be true instinctually and based on years of research, but have never actually heard spoken out loud.

Scott's intravenous protocol is one of the few protocols which actually make sense to me in light of the nuts and bolts of how Lyme disease works. Not just from one perspective, but a few perspectives. First, the protocol fully recognizes and addresses what I believe most doctors either are unaware of about Lyme disease or choose to ignore because it is too complicated: the dormant, or cyst, form of the bacteria.

Scott's treatment is given in three phases of IV infusion, the first of which is a potent nutritional mix that is designed to draw out and "expose" the cyst form of the disease. He says that he has spent years determining exactly which nutrients Lyme disease bacteria need. He believes that when these nutrients are administered, the cyst form exposes itself.

After this initial nutritional IV, additional substances are given to kill the bacteria in the next two infusions. Scott would not tell me exactly which substances they were, but he did say they are specially formulated (depending on patient test results) by a compounding pharmacy in Colorado.

Scott does not use regular blood tests to determine which infections might be plaguing his patients; instead, he uses careful, time-consuming, and repetitive dark field microscopic analysis, which, as many people know, is more of an art than a science - dark field microscopy can yield key insights into a patient's blood if you know how to do it right, or it can be a waste of time if you don't know what you are looking for.

The principle of drawing out cyst-form organisms in order to kill them is just about the only logical approach I've ever heard of. Lyme disease cysts are basically impenetrable and resistant to just about everything, including ozone, oxygen, antibiotics, exposure to distilled water, pH changes, and the list goes on.

Antibiotics like Flagyl and Tinidazole show some minor in vivo activity against cysts, but far from adequate.

The other aspect of Scott's protocol which I was fascinated with was the fact that he treats Lyme disease not as a bacteria, but as a parasite. Yes, he does acknowledge that Lyme disease organisms are spirochetes. However, in his mind, he believes spirochetes are parasites and not bacteria. Why is this an important distinction, you might ask? It is in fact a critical distinction. Bacteria are relatively simple organisms. Parasites, on the other hand, are larger, more complex, more "intelligent,"and harder to kill. The mere fact that Scott understands this immediately made me pause, press the phone a little closer, and actually start paying attention to what he was saying.

I made a similar observation of the parasitic nature of Lyme disease in my book, The Top 10 Lyme Disease Treatments. Here is an excerpt:

"Known as spirochetes, Lyme disease bacteria are unusual, not well studied, elusive and difficult to cultivate in the laboratory, and capable of advanced survival activities more commonly found in larger, more intelligent organisms."

Scott believes it is so important to understand this about Lyme disease organisms that he went as far as to say that physicians not trained in parasitology should not even treat Lyme disease! Scott himself has a background in hematology, parasitology, and other relevant medical disciplines.

Scott's father, also a physician, and whom I believe passed away recently, helped develop the IV protocol. Scott's father had a background in tropical parasitology and Scott believes that the study of exotic, advanced, and rare parasites was the key missing ingredient in developing an appropriate understanding of Lyme disease.

Scott even went as far as to say that Lyme disease organisms have their own internal immune system, as well as the ability to sense very small changes in the environment and react with a number of precise, responsive behaviors; and even change those behaviors slightly under different circumstances.

At this point the puzzle pieces in my head were starting to click together. I, too, believe that modern medicine oversimplifies Lyme disease as a simple bacterium when in fact it is much more complicated. Look at the complex aspects of Lyme disease such as seasonal symptom shifting, dormancy and reactivation, neurological diversity of presentation, resistance to antimicrobials, etc. This is not a simple bug.

Is Scott correct, that technically, Lyme disease is a parasite instead of a bacterium? I don't know, and it doesn't really matter, in my opinion. I believe Scott understands what most physicians do not understand: that a Lyme disease treatment approach must have great respect for the complexity of the Lyme disease organism, and treat the bug more like a smart beast on the run, rather than wimpy bacteria that just sits there waiting to be killed by doxycycline.

Unfortunately, Scott was very secretive about his treatments and protocols and did not want his identity publicly shared. In fact, his real name is not even Scott; I changed it to protect his identity.

Like most Lyme doctors, he is aware of the current harassment of Lyme practitioners and, since Scott knew that I am a Lyme disease author with the habit of making things very public, he was a bit shy in talking to me. That is why this article will not contain any specific information about Scott or his protocol.

Scott claims to have treated thousands of Lyme disease patients with great success. There is no way for me to objectively verify this claim, but that is not why I wrote this article. Whether or not Scott's statistics are completely honest or possibly inflated, I believe his insights are valid and worthy of further pondering and research. In fact, the complex and parasite-like attributes of Lyme disease organisms have been the primary focus of the books I have written on Lyme disease.

Treating Lyme disease as a complicated, intelligent, and survival-driven organism leads to a higher degree of treatment success, in my opinion. On the other hand, treating the organism as a simple bacterium almost always yields poor results.

What was neat about my conversation with Scott was that he verbalized a number of thoughts which I had never heard articulated before. I wish I could share more specifics, but I do not even know them - Scott wouldn't tell me.

So, the "take away" from this article is that you will hopefully have more respect for Lyme disease organisms and, when you are planning your treatment program, you will realize that you are up against an organism that behaves much more like an intelligent monster than a stupid bacterium.

Bryan Rosner is the author of 4 books on Lyme disease treatment. His latest book, Freedom From Lyme Disease, was published in August, 2014. Bryan lives in Northern California with his wife and three children.