In Vitro: Effectiveness of Samento and Banderol Herbal Extracts on the Different Morphological Forms of Borrelia Burgdorferi​ 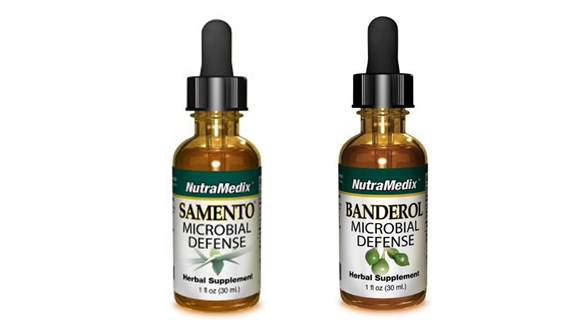 Abstract
A tick-borne, multisystemic disease Lyme borreliosis, caused by the spirochete Borrelia burgdorferi, has grown into a major public health problem during the last 10 years. The primary treatment for chronic Lyme disease is administration of various antibiotics. However, relapse often occurs when antibiotic treatment is discontinued. One possible explanation for this is that B. burgdorferi become resistant to antibiotic treatment by converting from their vegetative spirochete form into different round bodies and/or into biofilm-like colonies.

There is an urgent need to find novel therapeutic agents that can eliminate all these different morphologies of B. burgdorferi.

In this study, two herbal extracts, Samento and Banderol, as well as doxycycline (one of the primary antibiotics for Lyme disease treatment) were tested for their in vitro effectiveness on several of the different morphological forms of B. burgdorferi (spirochetes, round bodies, and biofilm-like colonies) using fluorescent, darkfield microscopic, and BacLight viability staining methods.

Our results demonstrated that both herbal agents, but not doxycycline, had very significant effects on all forms of B. burgdorferi, especially when used in combination, suggesting that herbal agents could provide an effective therapeutic approach for Lyme disease patients.

Borrelia burgdorferi, the primary causative agent of Lyme disease, is a spirochetal bacterium that can adopt different inactive forms, such as cystic and granular forms (round bodies), as well as colony-like aggregates both in vivo and in vitro, in the presence of unfavorable conditions such as exposure to the antibiotics commonly used for treating Lyme borreliosis. [1-4]

Unfortunately, when B. burgdorferi is in these inactive forms, conventional antibiotic therapy will not destroy the bacteria.[3] Still to date, the frontline treatment for Lyme disease is administration of pharmaceutical antibiotics such as doxycycline, minocycline, clarithromycin, penicillin G, and ceftriaxone.[4,5]

Many studies have shown that in spite of continued and high-dose antibiotic therapy, chronic Lyme disease is not treated successfully in many cases. [6]

Also, in the absence of ongoing antibiotic treatment, relapse is common. [7,8] This means that even after antibiotic treatment, the host immunity fails to prevent recurrence. [8] One possible explanation for this clinical observation is the presence of different morphological forms of B. burgdorferi, which may protect it from the antibacterial therapy. Soon after treatment, relapse is observed, most likely because the B. burgdorferi can revert to the spirochetal form.

Furthermore, the cost of antibiotic treatment, especially when administered intravenously, is substantial. Antibiotic therapy may also cause multiple undesirable side effects. [9] Thus, there is an urgent need for novel, more efficient, and more cost-effective treatment approaches that can efficiently eliminate all forms of B.burgdorferi.

Richard Horowitz, MD, president of the International Lyme and Associated Diseases Educational Foundation (ILADEF), has prescribed this protocol for over 2000 of his patients and reports that it has been effective for more than 70% of them.

The two herbal agents from the Cowden Condensed Support Program selected for this study are Samento (a pentacyclic chemotype of Cat's Claw [Uncaria tomentosa] that does not contain tetracyclic oxindole alkaloids), with reported antibacterial and antiviral properties, and Banderol (Otoba sp.), known to have antibacterial, anti-protozoal and anti-inflammatory effects. [10-12] Both herbal agents are used during the first two months of Cowden Condensed Support Program, then in rotation with other antimicrobials for the duration of this 6-month protocol.

In this study, we evaluated these natural anti-microbial herbal extracts as well as doxycycline (one of the primary pharmaceutical antibiotics for Lyme disease treatment) for their potential effects on the different forms of B. burgdorferi.

The infectious B31 strain of B. burgdorferi used in this study, obtained from American Type Tissue Collection (ATCC #35210), was cultured in 5% CO2 at 34 oC, in Barbour-Stoener-Kelly H (BSK H) medium supplemented with 6% rabbit serum (Sigma, St. Louis, Missouri) to midlogarithmic stage (2 × 107 cells/ml).

Samento and Banderol were obtained from Nutramedix LLC (Jupiter, Florida).

Doxycycline was obtained from Sigma.

Triplicate test tubes containing BSK H medium, with and without the appropriately diluted anti-microbial agents, were inoculated with a final density of 5×106 cells/ml of the test organism.

Direct cell counting methods with Petroff-Hausser counting chambers and morphological studies using fluorescent and darkfield microscopic techniques, as well as LIVE/DEAD BacLight Bacterial Viability Assay (Life Technologies Corp, Carlsbad,California), were utilized to assess the effect of the antimicrobial agents. For statistical analyses, one sample paired T-test was performed using NCSS statistical software (NCSS LLC, Kaysville, Utah).
Samento & Banderol Herbal Extracts
In the first set of experiments, we tested the in vitro susceptibility of the spirochete and round-body forms of the B. burgdorferi B31 strain to Samento and Banderol extracts for 96 hours, then direct cell counting and darkfield morphological evaluation methods were used to measure the effects of the antimicrobial agents. For both herbal extracts, the dilution of 1:400 most efficiently eliminated both the spirochetal and round-bodyforms (Figure 1A and 1B). However, when we used the combination of Samento and Banderol extracts, 1:300 dilution showed the most effectiveness, and this concentration was chosen for further study (Figure1C).

As a negative control, 0.25% ethanol treatment was also included in all experiments, because these herbal extracts contain ~25% ethanol to transport the nutrients into the cells and for stability.

In these experiments, we also compared the effect of Samento and Banderol with doxycycline, the most common antibiotic treatment agent for Lyme disease treatment in a 96-hour treatment period. Our results showed that doxycycline (250 mg/ml) was very effective in eliminating the spirochetal form of B. burgdorferi, but it significantly increased the round-body forms.

Comparing this doxycycline data with that of the herbal extracts, Banderol and the combination of Samento and Banderol (1:300) were more efficient in eliminating both the spirochetal and round-body forms of B. burgdorferi in vitro (Figures1A-C).

In the absence of antimicrobial agents, B.burgdorferi is forming biofilm-like colonies (Figure 2A) with mainly live bacterial cells. In the presence of Samento extract (1:300), the colonies were significantly smaller and less organized (Figure 2B), but they did stain with green dye, indicating that live cells remained.

In the presence of Banderol extracts, the size of colonies did not show any reduction; however, the cells inside the colonies are >90% dead.

In the presence of both herbal extracts, no sign of any colony formation was observed in the cultures, but we found evidence of a few individual nonmotile but green spirochetes and round bodies.

In the presence of doxycycline (250mg/ml), the average colony size was increased and contained mainly live round-body forms.

In this study, our working hypothesis was that for an efficient therapy, we have to find antimicrobial agents that can eliminate all the forms of B. burgdorferi. During the course of Borrelia infection, the bacterium can shift among the different forms, converting from the spirochete form to the others when presented with an unfavorable environment and reverting to the spirochete when the condition is again favorable for growth.[1-4]

To successfully eradicate B.burgdorferi, antimicrobial agents should eliminate all those forms, including the spirochetes, round bodies, and biofilm-like colonies. Here we have provided evidence that two natural antimicrobial agents (Samento and Banderol extracts) had significant effect on all three known forms of B. burgdorferi bacteria in vitro. We have also demonstrated that doxycycline, one of the primary antibiotics used in the clinic to treat Lyme disease, only had significant effect on the spirochetal form of B. burgdorferi.[5]

Our later results might provide some explanation for why relapse is so common after discontinuing antibiotic therapy. For example, some of the recent reports on animal experiments demonstrated that although pharmaceutical antibiotics are effective in ameliorating disease, the infection may persist even after seemingly effective therapy, which suggested that Borrelia may remain viable even after antibiotic administration.[14-15] If those pharmaceutical antibiotics only eliminate one form of this bacterium, the other forms could be the source of the persistent disease.

The other very important fact needs to be considered for an effective treatment for Borrelia infection: this bacterium typically has a life span ranging from several weeks to six to eight months; therefore, it may take six to eight months for even one generation of Borrelia to become exposed to the antimicrobial for elimination.[16]

Since the herbal extracts like Samento are reported to be nontoxic, they can be safely taken daily for the long period of time necessary to thoroughly eradicate Borrelia from an infected body.[17]

In summary, our study has provided in vitro research data on a novel treatment approach using herbal antimicrobial agents to efficiently eradicate B. burgdorferi, the Lyme disease bacterium.