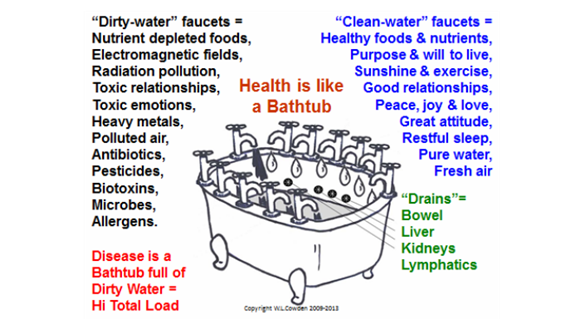 Most healthcare practitioners in the United States believe that Lyme borreliosis is an illness caused by the bite of an infected tick. However, many chronically ill patients whose blood tests confirm borreliosis have no clear recollection of a tick bite. Peer-reviewed scientific articles have demonstrated live borrelia in human saliva, semen, tears and other body secretions of infected individuals, as well as in the saliva of mosquitos, horse-flies and other biting insects and in banked human blood (in the USA, blood is not screened for borrelia or Lyme co-infections before being transfused). Therefore, Dr. Cowden believes that much of the transmission of Lyme disease is human-to-human and from biting insects other than ticks.  For those patients that become chronically ill after having been infected with Lyme-related organisms, there is often much more to restoring their health than simply controlling the numerous infections which may have been introduced. In fact, there are certain individuals that carry the same microbes in their bodies as someone chronically ill from borrelia and/or co-infections, but themselves having no symptoms of chronic illness. These asymptomatic individuals often do not have the same level of non-microbial contributors to illness which will be discussed below.  Consequently, if enough of the non-microbial contributors to Lyme disease are addressed by those who are chronically ill with Lyme, there is a greater probability for their full recovery. Treatment, therefore, should address as many of these co-contributors as possible.

Lyme disease mimics more than 350 diseases, several of which may have been present before the onset of Lyme Disease and may have even predisposed the patient to developing Lyme Disease.  Some of the disease processes that mimic Lyme disease can be brought on by chronic illness and therefore may have been caused by the Lyme infections.  Many of these co-conditions make it much more difficult for a patient to get well after all of the Lyme microbes are gone.  Dr. Cowden has produced a two-part archived webinar on the “Store” at www.acimconnect.com called “Lyme Disease Look-Alikes”, in which he and Connie Strasheim discuss the various conditions that mimic and contribute to Lyme disease and how to treat them so that Lyme disease (borreliosis plus co-infections) as well as these co-conditions can be more easily identified and resolved.

The Cowden Support Program (CSP described at www.nutramedix.ec) is a program using a number of products (created by www.NutraMedix.com in Florida) that have been used empirically for thousands of people suffering from Lyme borreliosis, co-infections & other undiagnosed chronic illnesses with quite positive results. The program (CSP) addresses infection, detoxification, heavy metals, hormonal imbalances, sleep and mood disorders, and pain. Dr. Horowitz in New York State verbally reported that more than 70% of his chronic Lyme patients markedly improved on the CSP over 6 months. More recently, Dr. Armin Schwarbach and Dr. Carsten Nicolaus at the Borreliose Centrum in Germany tested the CSP in 20 patients with borreliosis plus co-infections. Two patients dropped out unrelated to the CSP, but all 18 patients who completed the 9 months of CSP had blood laboratory improvement and 16 of those patients improved symptomatically.  When a practitioner is knowledgeable in using evaluative kinesiology or an electro-dermal screening (biofeedback) device, the CSP can be individualized and customized for the patient with even better results, especially since the various contributors that may be impacting the patient's health can be more accurately & thoroughly identified.

One of the most important contributors to infection, either acute or chronic, is the body’s toxic load.  If a patient does not deal with the numerous toxins stored within the body, it will not only take longer to get rid of the disease, but the patient will generally not remain symptom free and is more likely to relapse at a later time. Toxins create an environment in the body that supports the growth of microorganisms. Thus, detoxifying the body's internal “terrain” often becomes a more important treatment than the antimicrobial therapies. After years of advancing the germ theory of medicine, Louis Pasteur's own death-bed confession was "The microbe is nothing. The terrain is everything." With a focus on the terrain and addressing enough of the root causes of dis-ease, one can recover much more quickly & much more permanently. Thus, the ideal treatment program is one that incorporates both detoxification and antimicrobial therapies in a well-coordinated program.

Ill health is very much like a bathtub full of dirty water over-flowing onto the bathroom floor (an analogy of a symptomatic patient). A sick patient needs to limit or reduce those items that represent the "dirty-water faucets" flowing dirty water into the top of the bathtub, such as nutrient-depleted foods, electromagnetic fields, radiation pollution, toxic relationships, toxic emotions, polluted air, heavy metals, antibiotics, and pesticides. That patient also needs to increase those items that represent the "clean water faucets" at the top of the bathtub, such as purpose and will to live, sunshine, exercise, good relationships, peace, joy, and love, healthy food and nutrients, purified water, and fresh air. While simultaneously reducing the flow of dirty water and increasing the flow of clean water into the bathtub, the patient must ensure that the "drains" or channels of elimination at the bottom of the bathtub are open.  These organs of detoxification (drains) include the bowel, liver, kidneys, and lymphatics. The book, "Create a Toxin-Free Body and Home Starting Today", written by Dr. Cowden and Connie Strasheim, teaches the readers how to open the detoxification “drains” and how to close down the “dirty water faucets” affecting an individual and how to then provide that same individual with enough of the “clean water faucet” tools to heal their body. This book is available on www.acimconnect.com as well as on Amazon.com.  (THIS DISCUSSION ON LYME DISEASE WILL BE CONTINUED IN 3 ADDITIONAL PARTS ON www.acimconnect.com.)

William Lee Cowden, M.D., is the Chairman of the Scientific Advisory Board and Professor of the Academy of Comprehensive Integrative Medicine in Panama, and is a United States board certified cardiologist that is internationally known for practicing integrative medicine. He has co-authored six books.